Twenty thousand years ago, the glaciers formed the five Great Lakes we all know and love. But another “great lake” was also created — White Lake.

Located along the eastern shoreline of Lake Michigan, White Lake is a natural harbor lake. It is approximately seven miles long, one mile across, and flows directly into Lake Michigan through a deep water channel.

Such an ideal waterfront location initially brought the first Native American tribes to the region. Later, they were followed by fur trappers, traders, and eventually settlers.

A majority of Native American settlements were along waterways, as water provided an easy means of transportation, trade, and, in fish, a plentiful supply of food. Scattered fragments of stone tools and pottery mark the location of some of these prehistoric lakeshore encampments. Today, evidence of these cultures is meager. Some of the paleo-Indians left burial and other ceremonial mounds behind. Archeologists often find their projectile points and arrowheads, indicating sites where they hunted or camped for extensive periods of time.  But for the most part, evidence of Native American cultures in Michigan is not great.

The chief tribes in the western part of the lower peninsula of Michigan in the late 1700’s were the Ottawa. The Ottawa are generally considered to be an offshoot of the Ojibwe, with whom they continue to maintain close and friendly relations. Ottawa means “traders”.  Today, most Ottawa people live on reservations on their traditional lands in Michigan and Ontario. Read more here: How White Lake Got Its Name

Considering the difficulty in transcribing an oral Native American language to an English written version, several adaptations of White Lake emerged. In more recent years, an Ottawa Native American stated that Wababigun-nee-gish-gi-boo-goo Nebish, or, as the Native American explained, White-clay-that-is-being-washed-away Lake is the correct version. This rings true with the recollection of a school superintendent in 1876. Mr. Slayton one day asked a Native American what his people called White Lake. The Indian answered, “Wabagun-a-gee-skee-boo-goo Nebish”, explaining that it meant clay-washed and made the motions of washing his hands as he repeated the name.

The reason for the white color described by Native Americans and early explorers is due to marl deposits. The continuous washing away of this “white clay” by the natural outlet is what originated the name White Lake. A government channel was cut through part of the marl deposit and the marl quickly washed away. There is no longer any trace of it in the bed of the Old Channel, but an excavation in the side of the hill reveals that a part of this formation, which now lies high above the water level, reaches back from the lake. Other explorers also described the river as white. On the earliest known map of the region from 1684, it is plainly marked ‘La Riviere Blanche’, which is French for White River. Below is a picture of marl (or marlstone). Charles Mears built White Lake’s first sawmill in 1838. Four mills operated on White River tributaries during the next decade. Axmen, swampmers, skidders, loaders, and haulers cut and moved pine, hemlock, and cedar logs to the White River, where they were floated to the White River Log and Booming Company pens. There they were sorted and rafted to mills that produced lumber, shingles, lath, and pickets.

In 1883, there were thirteen mills in White Lake Area. Lumber was rafted down the lake and carried on barges to ships in Lake Michigan. Between 1838 and 1907 White Lake mills shipped over 3 million board feet of lumber. The lumbering era ended on White Lake when the Staples and Covell Mill closed in 1907. (There is a historical marker at the location.) By the end of the nineteenth century, the vast tracks of white pine were gone and White Lakers looked to the coming industrial era and fruit farming to survive. Lumber from the White Lake Area certainly helped to build Chicago after their disastrous fire in 1871. Read more here:

Industry developed slowly in the sister cities along White Lake, but one form of commerce quickly came to the forefront.

A wave of transportation from Chicago — via a Lake Michigan ship fleet called Goodrich Steamship Line and the Pere Marquette railroad line — brought families and other passengers from the city to camp to enjoy the natural beauty of our beach town. As a result, resorts sprung up along the lakes, beaches, and millponds of our area. Soon, a new industry was born: Tourism.

Throughout the early twentieth century, the shoreline resort area continued to grow in popularity as thousands of Chicagoans spent their summers at White Lake. Finally, following the Second World War, industry made a comeback. At this time, the tannery in Whitehall and the foundry in Montague were the two major companies going strong. Then, in 1946, Misco opened a facility in the area. Misco soon become Howmet (which, after several name changes is Howmet Aerospace today). It is still the county’s largest employer in the White Lake Area. In the 1950s, Hooker, Dupont, and Union Carbide also opened manufacturing facilities. With the addition of retail and service-oriented businesses, the White Lake Area enjoys a balance of employers that is the envy of larger communities. Additionally, the White Lake Area enjoys the reputation of being an excellent vacation destination with no shortage of things to do. We are alive with culture, art galleries, theatre,  local festivals, music, commerce, four-seasons of outdoor recreation, unique eateries and breweries, and natural beauty.

With a charming view and a friendly smile around every corner, the White Lake Area is an amazing place to live, work, and play every day. There’s a little something for everyone. 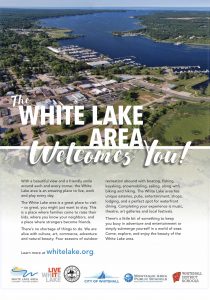 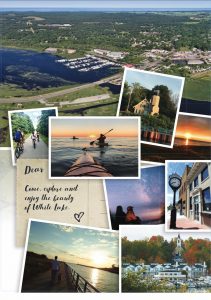