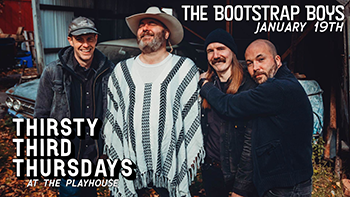 The Bootstrap Boys are a twangy Americana band from Grand Rapids, Michigan. Their newest project, their third full-length studio album, titled Hungry & Sober, is slated for release in early 2023. Recorded in Wimberley, Texas, at the formerly Austin-based Yellow DOG Studios and produced by David Percefull, this 10 song collection is a proper representation of the Northern Michigan flavored stylings of frontman and songwriter-in-chief Jake Stilson. Described by Percefull himself as sounding like “Colter Wall meets the Dead”, their signature mix of traditional Michigan-ish country, heavily influenced by rural church music and Christian bluegrass, and heady country rock like New Riders of the Purple Sage, The Byrds, and the Grateful Dead.

Existing in the same world that Waylon inhabited: unfiltered and tangible country rock that has attitude yet keeps your foot tapping. Glide Magazine, September 2021