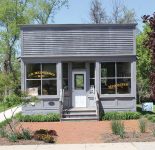 Dr. John Meinhardi built this now historic building where he practiced medicine and operated an apothecary. It was originally located in front of his house on Mears Avenue in 1903. After his death, the building was moved to an alley behind his house and, over time, neglected. In 2011 the building was moved to its present location and became a small museum, depicting what Dr. Meinhardi’s office might have looked like in the 1900s.

The building is open from Memorial Day to Labor Day and follows the same hours of operation as the Chamber of Commerce.